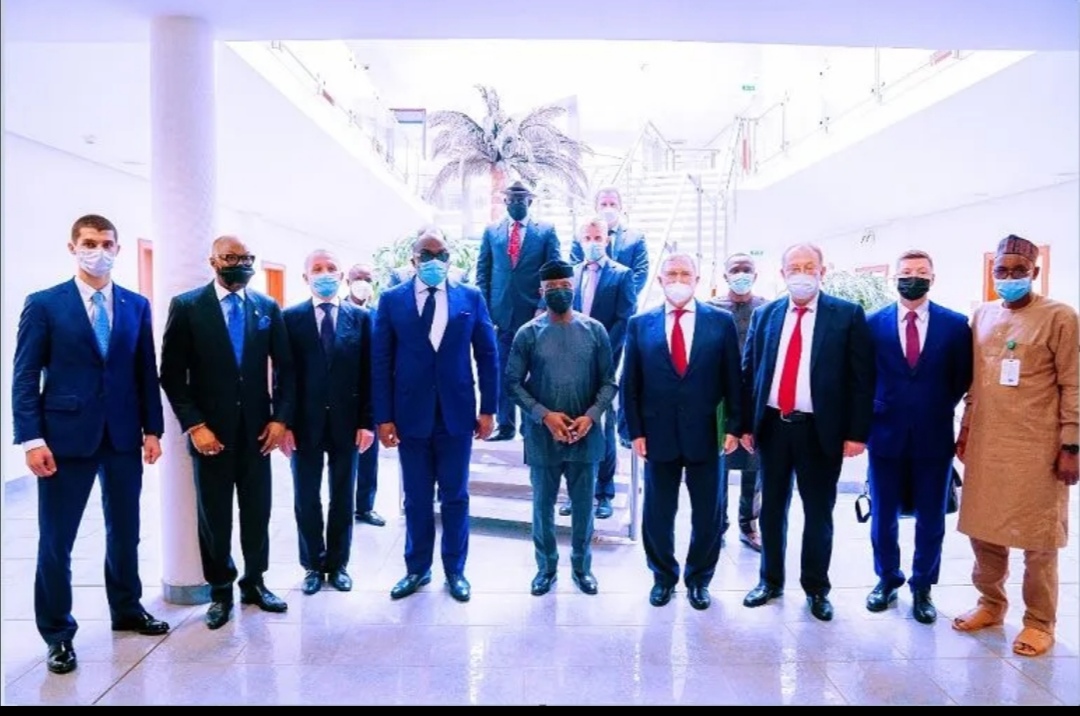 After Soviet's collapse, Russia has been struggling to find ways of regaining part of its Soviet-era economic influence throughout Africa. Nigeria is high on Russia's agenda for reviving multifaceted business ties, at least to share the market and take up opportunities similar to external players such as the United States, Europe and China.


Under the aegis of the newly established Nigeria-Russia Chamber of Commerce and Industry, Russians are now gearing up to revamp the Ajaokuta Iron and Steel Complex that was abandoned after the collapse of the Soviet Union three decades ago, and further take up energy, oil and gas projects in Nigeria, as well as facilitate trade between Nigeria and Russia.

After Soviet's collapse, Russia has been struggling to find ways of regaining part of its Soviet-era economic influence throughout Africa. Nigeria is high on Russia's agenda for reviving multifaceted business ties, at least to share the market and take up opportunities similar to external players such as the United States, Europe and China.

President Olusegun Obasanjo visited Russia in 2001. Since then, there had been a number of deals and business proposals, these previously and in theory featured in Russia-Nigerian relations. As far back in June 2009, Dmitry Medvedev as president visited Nigeria for the first time, held topmost state level talks on possible nuclear energy, oil exploration and military cooperation. There were talks also focusing on the establishment of petrochemical plant in Nigeria. Alongside there was also a declaration on principles of friendly relations and partnership between Nigeria and the Russian Federation.

Nowhere, among the four nation-tour, was it more obvious than in oil-rich Nigeria when Medvedev expressed regret saying Russia was "almost too late in engaging with Africa. In fact, work with our African partners should have been started earlier." But how do we evaluate Russia's engagement with Africa today, the levels of impact after the four-nation tour - Egypt, Nigeria, Angola and Namibia? Medvedev's statement still has some strong relevance, and a lot more implications and interpretations.

Russia has been prospecting for its nuclear-power ambitions down the years. According to Russia's Rosatom, the protocol signed at that time on nuclear offered the possibility for the development of nuclear infrastructure and the joint exploration and exploitation of uranium deposits. The aim, two nuclear plants estimated cost at US$20 billion – the bulk of it by Russia, is to boost Nigeria's electricity supply.

Russia's second-largest oil company, and privately controlled Lukoil, has gone back and forth these several years with plans to expand its operations in Nigeria, and in a number of West African countries. There has been a long-dead silence after Gazprom, the Russian energy giant, signed an agreement with the Nigerian National Petroleum Corporation (NNPC) on the exploration and exploitation of gas reserves with a new joint venture company known as NiGaz Energy Company.

Nigeria needs Russian technology to boost industrialization just as Russia needs Nigeria as a market for its industrial products and military equipment. There is weak indication that the two countries have sufficient and adequate perception of each other. This, in part, is responsible for the lack of the political will to implement the existing bilateral agreements.

There are many other aspects of the bilateral relations. With high interest, Russians are pushing for military-technical cooperation. The supply of Russian military equipment could play a high value addition to the fight against notorious Boko Haram. In most of the economic deals, the Nigerian political elites are under strong influence of Paris, London and Washington. The interest is to distance Moscow from African countries.

Nigeria is an economic powerhouse in West African region. As well known, Nigeria is one of the Africa's fastest growing economies and it boosts the largest population. Russia and Nigeria have some sort of economic relations, but these are not consistent with the long-standing cordial relations between both countries.
In addition, Nigeria is a vast market with huge potentials for prospective foreign investors and so is Russia. Regrettably, investors from both sides appear to know little about these opportunities. This is, usually attributed to the apparent inadequate knowledge of the many investment opportunities in both countries.

Statistics are extremely hard to obtain. By the end of 2018, Russia's trade with Nigeria was almost US$600 million, still seen as far below the full potential of trade and economic cooperation between the two countries. Stunningly, talking about bilateral economic footprints, both Russians and Nigerians are unprepared to give needed useful information about Russia's investment in Nigeria.

The term – bilateral relations – seen as a two-way street, Nigeria's presence in the Russian Federation is only the diplomatic representative office. Public outreach diplomacy is generally ineffective, both ways between Russia and Africa. Compared, for example, to American Growth and Opportunity Act (AGOA) and a number of trade preferences granted by Europe, Russians hardly encourage African presence in the Russian Federation.

On the other hand, Africans are simply undesirous or unenthusiastic about developing commercial links except a few countries. Despite criticisms, reports show that majority prefer traditional markets - the United States and Europe, and now Asian region. The African political elite and business people choose the United States and Europe for their holidays and as tourism destinations.

Undoubtedly, Africa is growing despite the tremendous challenges and several setbacks. There are still new windows opening especially with the start of African Continental Free Trade Area (AfCFTA), the most ambitious integration initiative embedded in the Agenda 2063 of the African Union.

It stresses working in industrial hubs, localizing manufacturing and marketing goods in the borderless trading space throughout Africa. It simply increases the attractiveness of the African market and makes it more significant for external players. This, however, points vividly to the fact that Africa is on a transformative journey of industrialization and diversification, and utilizing its vast reserves of natural resources.

While, it explicitly seems, Russian companies do not have enough resources to engage in such investment expansion, it is necessary to demonstrate dynamism, consistency and commitment with whatever economic areas and countries that are identified, especially this time at the start of the landmarked AfCFTA. With an estimated 1.4 billion people the market is potentially the largest, Africa - is the continent of the future.

Nigeria-Russia Chamber of Commerce and Industry, established and inaugurated late September 2021, now has as its primary task to raise bilateral economic relations between the two countries. It will help implement some of the significant issues that were discussed during the historic first Russia-Africa summit held October 2019 in Sochi, Russia.

President, Nigeria-Russia Chamber of Commerce and Industry, Dr Obiora Okonkwo told the visiting Russian delegation headed by Ambassador Oleg Ozerov, from the Ministry of Foreign Affairs of the Russian Federation and Head of the Secretariat of Russia-Africa Partnership Forum (RAPF), that establishment of the NRCCI was the first step towards resuscitating and strengthening existing relations between Nigeria and Russia.

He said the official inauguration of the chamber shows the beginning of a new journey that will enable "Nigeria explore business relations with the Russian Federation, and will promote economic growth, technology transfer, development and foster better understanding between both countries."

Reports indicated that Nigeria-Russia Chamber of Commerce and Industry (NRCCI) was created and incorporated under the Companies and Allied Matters Act 1990, and has established beneficial relationships and contacts with numerous economic development organizations in the Russian Federation.

The principal objectives of NRCCI is to promote commerce, industry, trade and ancillary services; foster, advance and protect commercial, industrial, trade and professional enterprises. "We are therefore seeking to establish an industrial development mechanism built on the principle of mutual beneficial relationships with their own business groups. The strategy is to establish and sustain business contacts with the existing numerous economic development organizations in Russia and Nigeria," explained Okonkwo.

The September working visit to Abuja was organized by the Association of Economic Cooperation with African States (AECAS) with support from the Russian Foreign Ministry, and with assistance from the Russian Embassy in the Federal Republic of Nigeria. Reports indicated that Ozerov and his delegation paid an official courtesy call on Vice President Yemi Osinbajo at the Presidential Villa.

According to reports, Vice President Osinbajo has expressed keen interest in developing bilateral cooperation and the need to increase the presence of Russian companies in Nigeria. Vice President Osinbajo stressed the fact that the formal inauguration of a Nigeria-Russia Chamber of Commerce and Industry (NRCCI) will consolidate efforts to deepen the long-lasting relationship and invigorate business opportunities between Federal Republic of Nigeria and the Russian Federation.

"We are interested in developing relations with Nigeria. It is one of the largest and most promising economies where we see lot of opportunities. We were happy to hear that the Vice President supports the development of bilateral economic relations. Russia has a lot to offer, from new technologies to fertilizers, agriculture, energy and infrastructure projects. We must intensify cooperation to achieve tangible results prior to the second Russia-Africa summit," Ambassador Oleg Ozerov, Head of the Secretariat of the Russia-Africa Partnership Forum, told journalists during the press conference following the meeting.