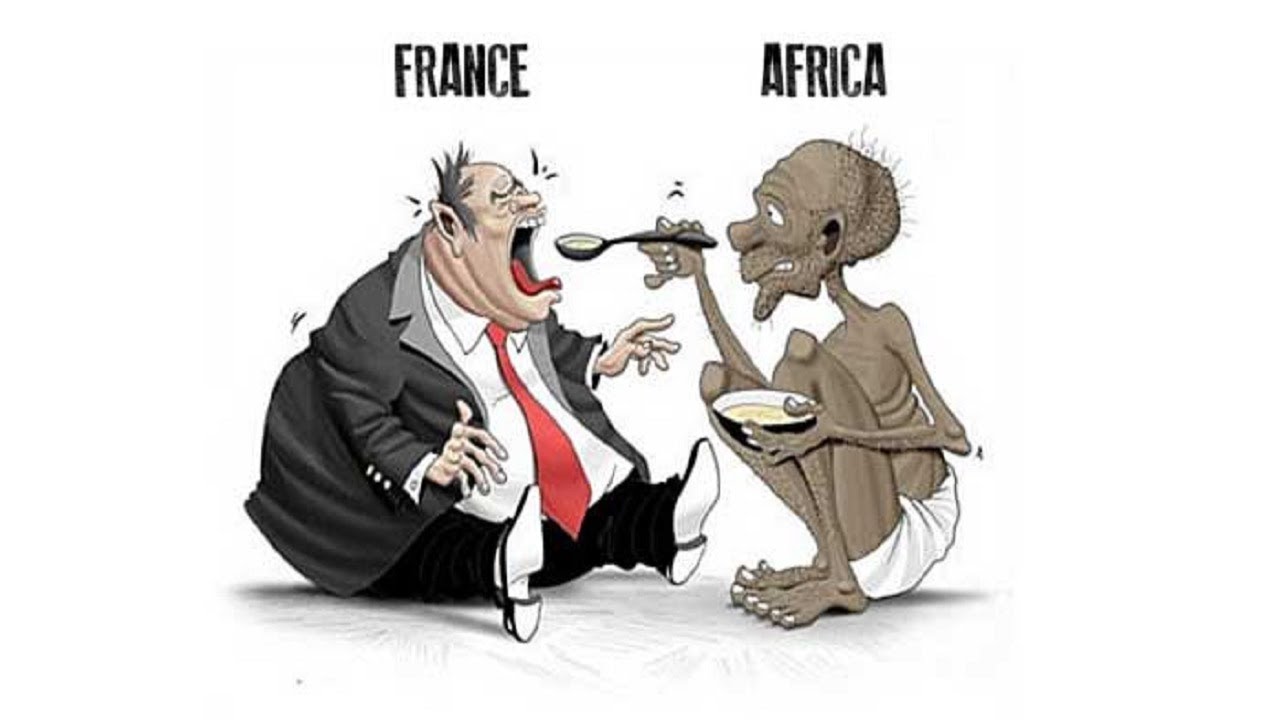 
It was against the rulers of France that the Africans on the island of Hispaniola won their national independence proclaiming the state of Haiti in 1804.

The enslaved Africans in Haiti waged a twelve-year revolutionary war that defeated France along with interventions by Spain and Britain. Haiti, the first Black Republic founded by former enslaved people, set the stage for the modern-day proliferation of neo-colonialism.

After independence under a world dominated by imperialism, the former colonial powers seek to dominate the oppressed peoples through economic and military means. Haiti was subjected to a blockade from both the United States and France during the early and middle decades of the 19th century. It was not until the Civil War in the U.S. that Haiti was recognized politically by Washington.

As early as 1825, France sent a flotilla of warships to the Caribbean to demand the payment of “indemnity” by Haiti to Paris for the loss of property and the profits which they would have accrued if the slave system had not been overthrown. Haiti had been the most prosperous of all the slave colonies during the 18th century.

Successive Haitian governments were forced to make payments to the former colonial power of France while its own economic development was stifled. France demanded from the people an arbitrary 150 million francs in unjustifiable claims over wealth which was stolen from the indigenous and African people victimized by European imperialism. The invented financial obligations to Paris were later reduced to 90 million francs in 1838. Today the value of these payments would exceed US$20 billion.

France refused to recognize Haiti if these payments were not made as the imperialist power collected the last indemnity payment in 1893. Subsequently, the government of the U.S. facilitated the acquisition of Haiti’s treasury in 1911. It would take until 1947 for Haiti to be released from the interest payments to the National City Bank of New York, now known as Citibank.

Today, Haiti is still impacted by the legacy of French and U.S. interference in its internal affairs which involved several military occupations along with the exploitation of the labor of the people. The kidnapping of 17 missionaries from the U.S. and Canada during mid-October must be viewed within the broader context of the recent assassination of President Jovenal Moise, the deployment of Pentagon military forces to the embassy in Port-au-Prince, the deportation without due process of thousands of Haitian migrants seeking refuge in the U.S. and the failure of the Haitian politicians to establish a stable successor administration.

Another major historical struggle against French imperialism occurred in the North African state of Algeria between 1954-1962. France had colonized Algeria beginning in 1830 exploiting its natural resources and the labor of its people.

France’s tenure in colonial Algeria left a trail of massacres as people continued to demand their fundamental human and political rights. By 1954, the most advanced elements in Algerian society took up arms against the occupying military and political elites. During the course of the war, reports indicate that more than one million Algerians lost their lives.

In response the Algerian President Abdelmadjid Tebboune withdrew the country’s ambassador from France. Later it was announced that the French military would not be allowed to utilize Algerian airspace. The tensions between the two countries had worsened as well due to the hosting of a reception to honor those Algerians who fought against their own people on behalf of France during the revolutionary war of the 1950s and early 1960s.

“The moves also come amid tension over a French decision to sharply reduce the number of visas it grants to citizens of Algeria, Morocco and Tunisia. ‘Following remarks that have not been denied, which several French sources have attributed by name to [Macron], Algeria expresses its categorical rejection of the inadmissible interference in its internal affairs,’ the statement said, adding the French comments were ‘an intolerable affront’ to Algerians who died fighting French colonialism.

‘The crimes of colonial France in Algeria are innumerable and fit the strictest definitions of genocide,’ it said. French daily Le Monde reported that Macron made critical remarks about Algeria during a meeting on October 7 with French Algerian descendants of the Harkis, Algerians who fought on the French side during Algeria’s war of independence.

According to Le Monde, Macron said Algeria was ruled by a ‘political-military system’ and described the country’s ‘official history’ as having been ‘totally re-written’ to something ‘not based on truths’ but ‘on a discourse of hatred towards France.’ The newspaper added the French president made clear he was not referring to Algerian society as a whole but to the ruling elite.”

On October 17, France recognized its role in a massacre of Algerians in Paris in 1961. The Algerians were demonstrating in alliance with the National Liberation Front (FLN) which led the mass and armed struggle against French colonialism. 60 years ago, the French police opened fire on thousands of demonstrators killing at least 120, injuring and arresting many more.

A report published by the Associated Press stressed:

“’The repression was brutal, violent, bloody’ under the orders of Paris police chief Maurice Papon, Macron said in a statement released Oct. 16. About 12,000 Algerians were arrested and dozens were killed, ‘their bodies thrown into the Seine River,’ the statement said…. Papon later became the highest-ranking Frenchman convicted of complicity in crimes against humanity for his role in deporting Jews during World War II…. The Movement against Fascism and for Friendship between People, or MRAP, deplored that Macron’s statement did not include ‘any word about the context of the Algeria war, any word on colonialism, nothing about archives… even less about reparations.’ Earlier this year, Macron announced a decision to speed up the declassification of secret documents related to Algeria’s 1954-62 war of independence from France. The new procedure was introduced in August, Macron’s office said.”

Rather than improving the post-colonial relationship between Paris and Algiers, Macron appears to be making it worse. Such a set of affairs in recent weeks indicates the unsustainability of French foreign policy in Africa going forward.

Other Attacks on French Neo-colonialism

The politico-military crises of governance in the West African states of Mali and Guinea are further indications of the inability of France to maintain a consistent diplomatic approach to its former colonies. Over the period since 2020, there have been two military coups in Mali and another one in Guinea.

Those involved in the military seizures of power from civilian governments had maintained close ties with the French and U.S. governments. The U.S. Africa Command (AFRICOM) has operations inside Guinea and Mali as well as several other countries in the West Africa region.

Pentagon defense colleges have provided training to the military coup makers in Mali and Guinea. The current military president of Guinea, Lt. Col. Mamady Doumbouya, was a former member of the French Foreign Legion and at the time of the coup in early September, he was involved as a special forces officer in maneuvers with AFRICOM forces. Although the U.S. and France claim that their governments had no involvement in the coup, their approach to the new military regime has been largely the same as before the putsch.

The regional Economic Community of West African States (ECOWAS), composed of 15 member-states, has been rebuked by both the Guinean and Malian military leaders. Business interests based in France and the U.S. conducting mining operations in Guinea, have not paused their economic activities.

Yet two interesting events have occurred in recent weeks that should be viewed alongside the diplomatic struggle between Algeria and France. An Africa-France Summit was held in early October in Montpellier where youth confronted Macron over his policies towards the continent.

Radio France International (RFI) reported on this event noting that:

“Kenyan civil society member Adele Onyango asked Macron to look at France’s troubled relationship with Africa, demanding an examination of inefficiencies, gaps in integrity, and unethical behavior. ‘We as Africans feel the pain of colonization every single day,’ Onyango said. ‘The air of denial that France chooses to sit in is uncomfortable not only for Africa but also for France… How can you trust the source of your pain when the source doesn’t acknowledge it?’ she added. Onyango evoked what she considered France’s double standard—claiming to stand for human rights, while collaborating with agencies, leaders and individuals whose position on a wide range of societal issues in Africa is less than clear.”

Finally, a military-appointed prime minister in Mali on October 8 accused France of training a terrorist organization inside its territory. This grouping was said to have been instrumental in the post-2011 destabilization of neighboring Libya, where a Pentagon-NATO bombing campaign resulted in the destruction of the government of the late leader Col. Muammar Gaddafi who was killed at the aegis of Washington a decade ago on October 20.

“Mali’s Prime Minister Choguel Kokalla Maiga told Sputnik on Oct. 8 that French troops had created an enclave in Kidal, a town in the desert region of northern Mali, and handed it over to a terrorist group known as Ansar al-Din. ‘Mali has no access to Kidal, this is an enclave controlled by France,’ he said, adding that the Malian military was banned from entering the territory. ‘They have armed groups trained by French officers. We have evidence… We do not understand this situation and do not want to tolerate it,’ the Malian prime minister said. Maiga further said that the alleged terrorists that are operating in the country ‘came from Libya, and who destroyed the state of Libya? It was France with allies.’”

Therefore, from the youth to those aligned with the African military juntas see the contradictions within French foreign policy. It will be up to the masses of people around the world to unite against this colonial and neo-colonial project bringing it to a resounding conclusion.
By Abayomi Azikiwe
Editor of Pan-African News Wire.
Tags: France Africa Imperilaism
Share on Facebook
Share on Twitter
Share by E-Mail
Share on WhatsApp
Share on Telegram
Top stories
Mozambique Might Require Foreign Military Assistance To Clean Up Its Hybrid War Mess
Russia-Africa Summit: The Roadmap to Africa, Shift in Geopolitical Relations
China and Russia Launch a ‘Global Resistance Economy’
Why South Africa Should Embrace Pakistan’s “Look Africa” Policy
News
powered by Surfing Waves