Voting for Polarization and Disunity in Libya 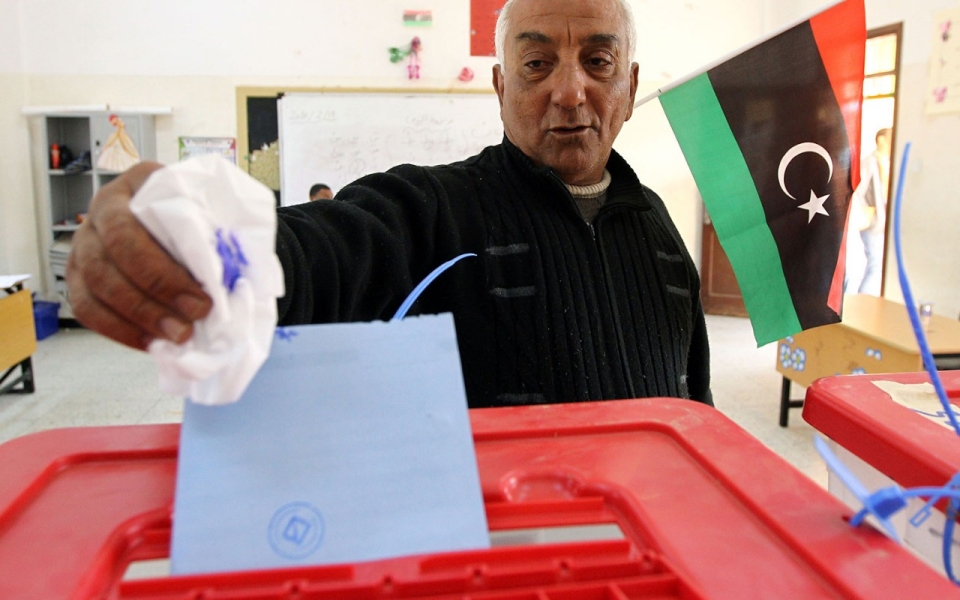 Libyan stability matters. Over the past decade, a stream of mercenaries, terrorists and weaponry flooding out of Libya’s southern borders have fueled a plethora of conflicts throughout sub-Saharan Africa. Meanwhile, hundreds of thousands of migrants and refugees have taken advantage of the chaos in a bid to cross the Mediterranean and enter Europe. Libya has, furthermore, mutated into a proxy conflict for a spectrum of international players.


Voting for Polarization and Disunity in Libya
By Baria Alamuddin *
Is Libya set to erupt in flames all over again? It seems that its most prominent politicians and their foreign backers are doing their utmost to make it so.

After a decade of conflict, Libya desperately needs reconciliation and de-escalation. Yet the nation’s two most divisive figures — Saif Al-Islam Qaddafi and Khalifa Haftar — currently top the bill in the upcoming presidential election.

Libyan stability matters. Over the past decade, a stream of mercenaries, terrorists and weaponry flooding out of Libya’s southern borders have fueled a plethora of conflicts throughout sub-Saharan Africa. Meanwhile, hundreds of thousands of migrants and refugees have taken advantage of the chaos in a bid to cross the Mediterranean and enter Europe. Libya has, furthermore, mutated into a proxy conflict for a spectrum of international players.

As tensions again approach boiling point, Libyan politicians can’t even agree on the regulations governing the election. An election law was unilaterally submitted by Parliament Speaker Aguila Saleh (himself a presidential candidate) without allowing MPs to vote on the measure. Article 12 of this law, which blocks serving officials from standing for the presidency, has proved particularly divisive, creating a genuine risk of major constituencies boycotting the vote or rejecting the results outright. Such a scenario could entail a regression back into armed conflict between a dizzying array of militias and mercenaries.

Both Qaddafi and Haftar face international war crimes charges, so how do they viably hope to be the international face of Libya during a phase when the nation desperately needs to reopen its doors to the world? Qaddafi was a central player in his father’s excessively brutal — and doomed — crackdown in 2011. Hence, a wide swathe of Libyans witnessed loved ones murdered as a result of Qaddafi’s actions. Haftar, likewise, is regarded as a warlord by many Libyans and a wholly unpalatable prospect as leader. There have already been vigorous protests against both figures’ participation. The international community will be tying itself up in knots if Libya’s next president is a designated war criminal. So it is better to act now in support of a fair and open process, in which consensus candidates can emerge.

Turkey became embroiled in the Libyan quagmire in 2019, when Haftar launched a series of new offensives, including against the capital Tripoli. An increasingly desperate Government of National Unity controversially signed away a large chunk of the Mediterranean as a Turkish exclusive economic zone in exchange for Ankara wading into the conflict on its behalf. Turkey flooded the country with thousands of Syrian militias, who blocked Haftar’s offensive but have since been accused of looting, rape and war crimes. Turkish President Recep Tayyip Erdogan has not only gained highly contentious oil and gas drilling rights, he has also obtained military bases on the African continent that he will be in no hurry to surrender — despite calls for the departure of all foreign fighters. In early 2021, it was estimated there were 20,000 foreign mercenaries on Libyan soil.

At the Manama Dialogue last week, I asked Libyan Foreign Minister Najla Mangoush about the prospects for the election. Yet, beyond wishing everybody good luck and commenting that the procedures were all new, it was striking how reluctant she was to comment on a political process that has become so contentious that, just a couple of weeks previously, the Libyan presidency sought to force her suspension — a move that was angrily blocked by the government.

Even though numerous other Libyans, including former Interior Minister Fathi Bashagha and ex-Prime Minister Ali Zeidan, have submitted their candidacies, the risk is that the campaign ends up becoming a polarizing battle between deeply divisive figures whose vigorous support bases and outsized national profile guarantee them a significant share of the vote.

In 2011, the West supported Muammar Qaddafi’s overthrow and then turned its back as Libya descended into factional bloodshed. There are risks of a similar scenario in 2021, with European nations failing to fully focus on the critical importance of this election or the incalculable risks if matters go awry. Although Libya’s stability is crucial for Europe, confused and contradictory Western policies from states like Italy, Spain and France have often exacerbated the crisis. Other interlopers must likewise stop cynically exploiting Libya as a square on their regional chessboard.

Following the suspension of parliament in Tunisia, all the so-called Arab Spring states have ultimately ended up with fewer political freedoms, higher levels of civil instability and greater economic dysfunction than they had prior to 2011. Revolutions that sought to expand the rights and freedoms of Arab peoples have only given rise to unbridgeable tensions and disunity. Likewise, in post-revolution Sudan, with widespread civil disorder and the army seeking to reassert power and depose civilian politicians, there are serious risks of a return to the bad old days of the Bashir era.

Libya still has a slim but genuine chance of bucking this trend — if voters can unite around a consensus presidential candidate and successfully hold parliamentary elections in a manner that doesn’t precipitate renewed bouts of fragmentation and strife.

The coming weeks decisively offer the stark choice between war and peace for Libya, with major consequences for Europe, Africa and the Middle East. Let us not see this notched up as yet another tragic missed opportunity. Likewise, rather than outside powers fighting for their proxies to dominate everything, they should amicably seek to capitalize economically from the peace dividend by playing a legitimate role in restabilizing and rebuilding this shattered nation.
Libyans can do infinitely better than opting for a war criminal as their next leader, while mortgaging their territories to foreign powers. Let us do everything possible right now to grant them every prospect for success.

Arab News is Saudi Arabia's first English-language newspaper. It was founded in 1975 by Hisham and Mohammed Ali Hafiz. Today, it is one of 29 publications produced by Saudi Research & Publishing Company (SRPC), a subsidiary of Saudi Research & Marketing Group (SRMG).

By Baria Alamuddin
An award-winning journalist and broadcaster in the Middle East and the UK. She is editor of the Media Services Syndicate and has interviewed numerous heads of state
Tags: Africa Libya Elections Foreign mercenaries
Share on Facebook
Share on Twitter
Share by E-Mail
Share on WhatsApp
Share on Telegram
Top stories
Mozambique Might Require Foreign Military Assistance To Clean Up Its Hybrid War Mess
Russia-Africa Summit: The Roadmap to Africa, Shift in Geopolitical Relations
China and Russia Launch a ‘Global Resistance Economy’
Why South Africa Should Embrace Pakistan’s “Look Africa” Policy
News
powered by Surfing Waves