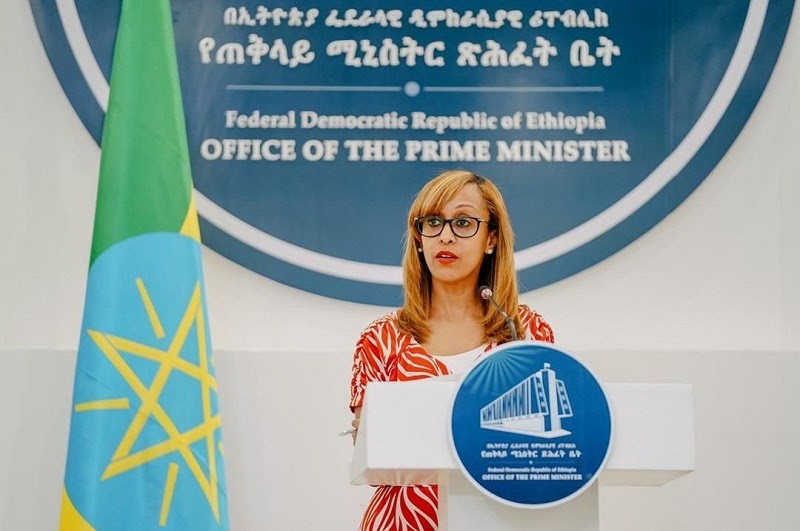 Prime Minister Abiy Ahmed of the Federal Democratic Republic of Ethiopia has returned from the frontline in the battle to halt the advances of the Tigray People’s Liberation Front (TPLF).

Prime Minister Abiy Ahmed of the Federal Democratic Republic of Ethiopia has returned from the frontline in the battle to halt the advances of the Tigray People’s Liberation Front (TPLF).

TPLF rebels launched an attack on the Ethiopian National Defense Forces (ENDF) during early November of 2020 triggering a conflict which has resulted in the deaths of thousands and the displacement of several million people inside the country and in neighboring Sudan.

Abiy, who was elected to a full term of office in 2021, had already declared a unilateral ceasefire in June. Nonetheless, the TPLF continued the conflict by sending its rebel forces into the Amhara and Afar populated areas of Ethiopia.

Ethiopia, a vast country of over 115 million people, the second most populous state on the African continent, is composed of numerous ethnic groups and nationalities. Since the ascendancy of the Abiy administration in the aftermath of a national uprising against the TPLF-led Ethiopian People’s Revolutionary Democratic Front (EPRDF) regime in the early months of 2018, the prime minister has sought to unite the country under the political banner of the Prosperity Party (PP). 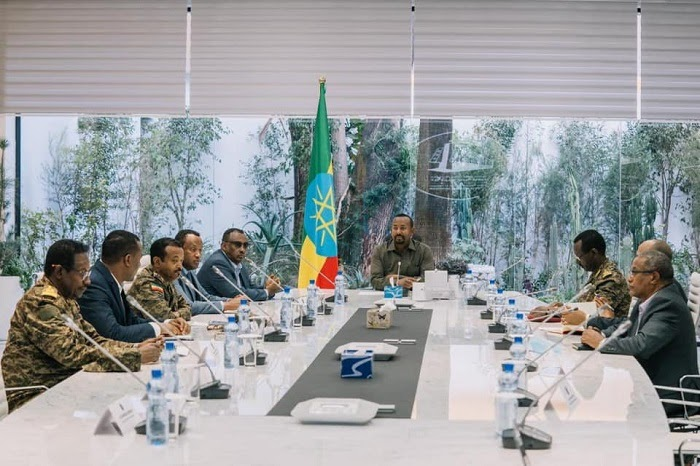 The TPLF grouping which maintained control of the Tigray province after 2018 in the north of the country has consistently refused to participate in efforts aimed at building national unity in Ethiopia and Pan-African solidarity throughout the Horn of Africa region. The rebels held provincial elections in 2020 despite the call by the central government in Addis Ababa to postpone voting across the country due to the COVID-19 pandemic.

Obviously, the central government was taken unawares after its forces were attacked in the Tigray provincial capital of Mekelle. In the first few months of the war, the ENDF retook Mekelle and other areas of the province prior to announcing a unilateral ceasefire in June for the purposes of allowing humanitarian assistance and the agricultural production of the farmers.

In recent weeks, after the prime minister visited the frontline, the character of the conflict has shifted once again. The Ethiopian military has been able to retake land from the TPLF in the most contested areas of the country.

United States media outlets apparently working in collaboration with the State Department and the Pentagon, began to spread misinformation about the purported “imminent collapse” of the Abiy government in Addis Ababa in November. These reports were contradicted by the Ethiopian government along with visitors to the country who repeatedly stated that the capital city was calm even with the prime minister’s declaration of a state of emergency.

The claims of mass starvation, sexual assault and accusations of ethnic cleansing and genocide flourished within the western governmental and corporate press agencies. The Ethiopian administration of Prime Minister Abiy was identified by the U.S. and its allies as the perpetuator of these crimes. However, the government denied these allegations saying the charges were solely being leveled by the TPLF and its supporters to further isolate Addis Ababa.

Eyewitness reports related to the war crimes committed by the TPLF’s Defense Forces (TDF) went largely ignored by the western media. TPLF forces took trucks and other equipment sent to the area for humanitarian purposes. The Abiy government accused elements working within the United Nations framework in Ethiopia as being collaborators with the rebels. In the modification of their allegations of war crimes committed by the central government, in recent week the western-backed agencies are now saying that abuses have occurred on both sides of the conflict. The prime minister and his government have categorically rejected any accommodation of the TPLF and its demands which often solidarizes with imperialist interests in the Horn of Africa.

An Ethiopian-oriented news agency, Borkena.com, reported on the recent situation on the battlefront noting that: “Tigray People’s Liberation Front (TPLF) forces retreated to the Tigray region of Ethiopia after facing devastating military defeats in the Afar and Amhara regions of Ethiopia over the past three weeks. Six prominent TPLF military generals whose names are still undisclosed were killed in the Kasagita Front in the Afar region of Ethiopia, as reported by local Ethiopian sources about three weeks ago. After losing a fortified military stronghold in the areas, whose objective was said to be to cut off the supply route to Djibouti and hold Ethiopia in a choke position, losing battles became pervasive in the areas it controlled. In a span of less than two weeks, TPLF was forced to leave cities after cities in the western, Eastern and Wollo front in the center. Shewarobit, Debre Sina, Ataye, Kemissie, Kombolcham Batie, Dessie, Haik, Wuchale, Wurgehsa, Mersa, Woldia and Kobo were freed from TPLF forces one after the other.” ( borkena.com)

The Role of the U.S. and United Nations in the Conflict

Under the previous administration of President Donald J. Trump, threats against Addis Ababa were made related to the construction and operations of the Grand Ethiopian Renaissance Dam Project (GERD). The project, which is the largest hydroelectric plant in Africa, has been planned for years by the Ethiopian government to enhance its own internal power supply and to assist other states within the broader region known as the Nile Basin Initiative. (nilebasin.org)

Neighboring Egypt has sought to sabotage the GERD under the guise that it will severely curtail access to the waters of the Blue Nile which is shared by both countries. The current arrangements imposed by British imperialism during the early 20th century favors Egypt, its then colonial subject. Ethiopia, although occupied by the Italian fascist forces between 1936-1941, has never been subjected to direct colonial control by European powers.

Trump had urged Egyptian President Abdel Fattah el-Sisi to “blow up” the GERD after Ethiopia rejected a deal imposed by Washington. The statement was made to Sudanese interim Prime Minister Abdalla Hamdok during 2020, at the time of Khartoum’s illegal “recognition” of the State of Israel.

Unfortunately, the United Nations humanitarian agencies have taken a position similar to the U.S. in regard to the war. Ethiopia has set strict limits on access to conflict areas which have been utilized by certain UN agencies to make accusations against the government in Addis Ababa.

However, what has created even more tension is the declaration by the UN Human Rights Council (UNHRC) to conduct an investigation into the claims of war crimes since November of 2020 in the north of Ethiopia. The government in Addis Ababa has rejected the plans for an investigation saying it will not cooperate since these issues are internal matters.

A press briefing was held on December 21 in Addis Ababa featuring the spokeswoman for Prime Minister Billene Seyoum who addressed the announcement by the UNHRC. Borkena.com in an article on the briefing emphasized: “Ethiopia says the resolution was politically motivated. Politically motivated because it discredited the efforts by the Ethiopian government to investigate rights abuses in the Tigray region. Earlier this year, the Ethiopian government martial court looked into cases of violations by members of the Ethiopian Defense Forces. Those who were found to be guilty were punished in accordance with the martial court. In regard to claims of genocide in Tigray by the TPLF surrogates and some state actors tacitly supporting the designated terrorist group, a joint investigation by the United Nations Human Rights Commission and Ethiopian Human Rights Commission ruled that there was no genocide in Tigray. The press secretary on Tuesday (Dec. 21) reflected a view that the UN Human Rights Council should stop practices that sound as partisanship and consider the importance of investigating rights abuses in the Afar and Amhara regions of Ethiopia where the TPLF carried out multiples of atrocities during the months of occupation in parts of these regions.” (borkena.com) 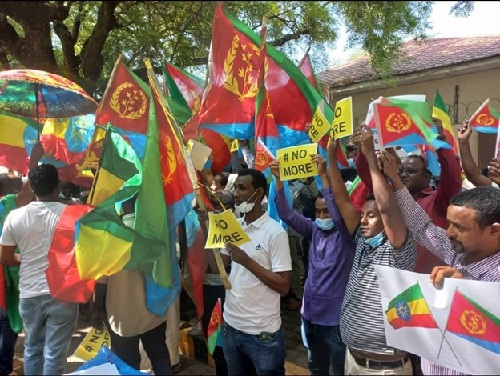 The attacks on Ethiopia have generated mass demonstrations domestically and internationally known as #NoMore. Thousands of Diasporic Ethiopians and Eritreans have held joint demonstrations across the world including the U.S. These actions intensified after the announcement of sanctions by Washington against Ethiopia. In addition, a leaked videotape of a secret meeting involving the U.S., UK, European Union and TPLF officials where plans were being discussed for the imposition of a new government after the removal of Prime Minister Abiy. (Youtube.com)

These developments illustrate clearly the real aims and objectives of the war being waged against the Ethiopian government. Anti-imperialists throughout the world, with specific to the western capitalist states, must be in solidarity with the Ethiopian people in these attempts to destabilize and overthrow the legitimate administration inside the country.
By Abayomi Azikiwe
Editor of Pan-African News Wire.
Tags: Ethiopia Regime Change Western-backed Rebels Africa.
Share on Facebook
Share on Twitter
Share by E-Mail
Share on WhatsApp
Share on Telegram
Top stories
Mozambique Might Require Foreign Military Assistance To Clean Up Its Hybrid War Mess
Russia-Africa Summit: The Roadmap to Africa, Shift in Geopolitical Relations
China and Russia Launch a ‘Global Resistance Economy’
Why South Africa Should Embrace Pakistan’s “Look Africa” Policy
News
powered by Surfing Waves