Foreclosures Moratorium Extended for One Year in Detroit and Wayne County 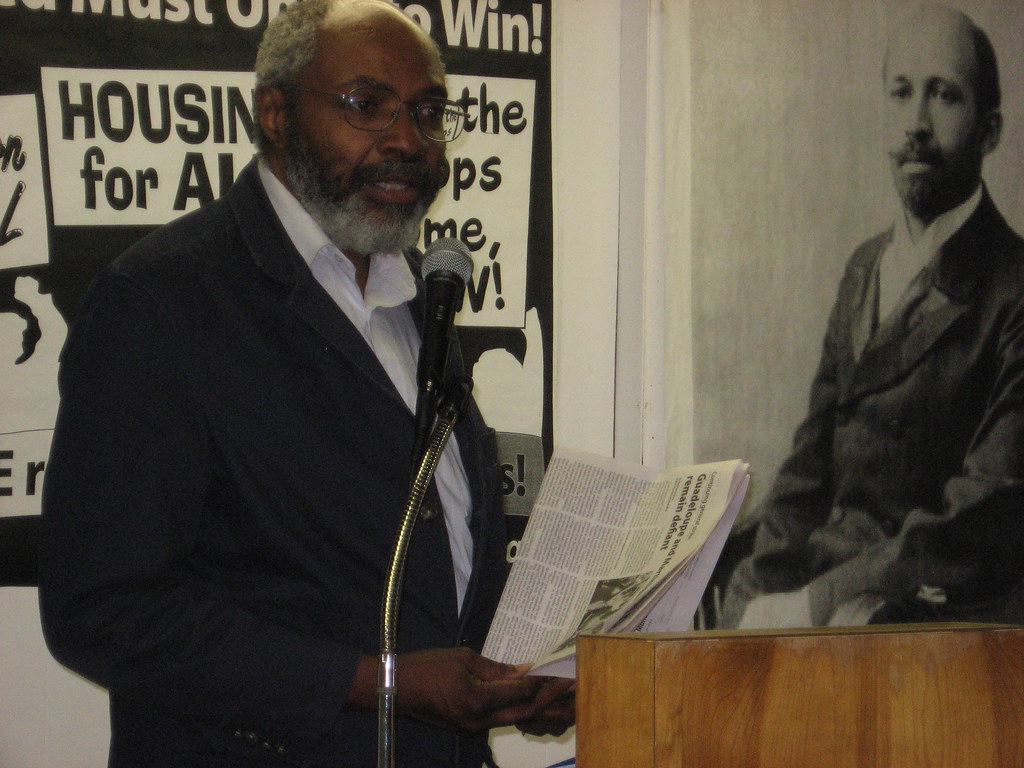 The so-called Great Recession of 2008-2010 can be viewed as the modern-day manifestation of the housing crisis, although the actual problems extend back many decades to the inherent racist character of the Federal Housing Act and the Federal Highway Act enacted from the 1930s to the 1960s.


Moratorium NOW! Coalition welcomes decision however is calling for a permanent solution to the housing crisis in the area and nationally

A Wayne County judge on March 29 granted a motion by Treasurer Eric R. Sabree extending the ban on owner-occupied homes being placed in jeopardy of seizure and public auction.

This decision came in the aftermath of a campaign by the Moratorium NOW! Coalition (MNC) and other housing groups in the city of Detroit. 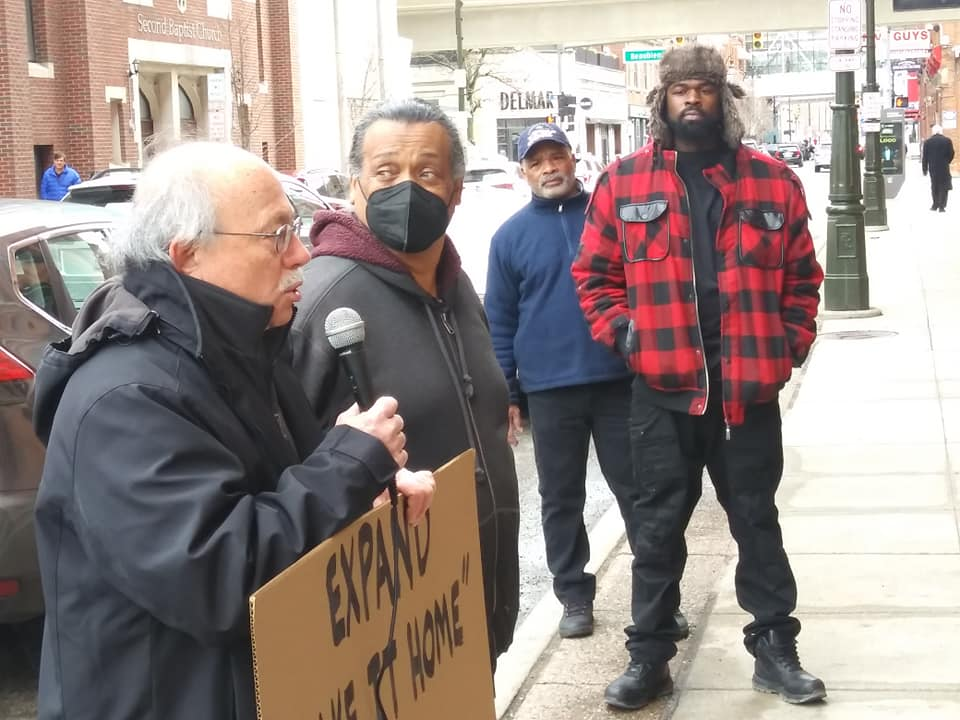 A resolution was passed on March 29 by the Detroit City Council in favor of an extension after numerous people spoke out at the municipal legislative meeting calling on people to participate in the demonstration the following day at the Wayne County Treasurer’s Office in the Greektown district of Downtown. Although this resolution was passed without opposition, the MNC is calling for a permanent solution to the housing crisis in Detroit and throughout the county.

Activists gathered outside at 400 Monroe, the Wayne County Treasurer, on March 30 welcoming the extension of the halt to foreclosures and auctions of owner-occupied homes, however, emphasizing that renters and those owing taxes prior to 2017, are also in dire need of protection from homelessness. Auctioning of owner-occupied homes among other properties in Detroit has not resulted in any revitalization of neighborhoods where people are still leaving in the thousands every year. 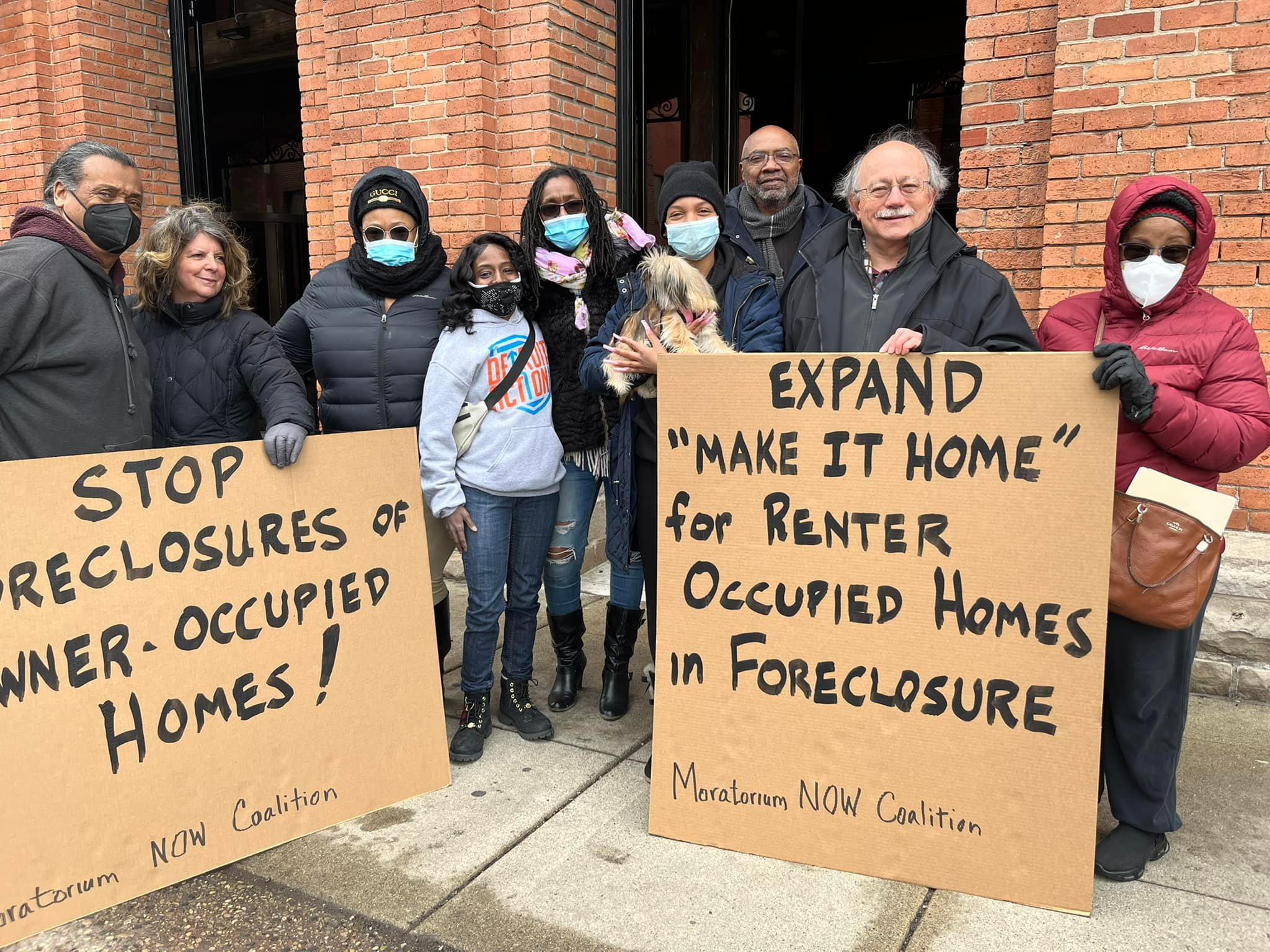 MNC has been waging a struggle against property tax foreclosures since 2015 when it was announced that tens of thousands of households were being threatened with home seizures. A citywide effort in 2015-2016 ushered in the current period where homeowners were allowed to make arrangements for paying property tax arrearages.

Later in 2016, a class action lawsuit was filed by the Michigan American Civil Liberties Union (ACLU), the NAACP Legal Defense Fund and Covington & Burling, a private law firm. Although an out-of-court settlement was agreed upon in 2018, the ruling did not provide any real relief for those who had lost their homes years before due to the role of the financial institutions, real estate firms, the failure of city, state and federal agencies to protect homeowners and the general population which suffered due to the lost of population and tax incomes. Homeowners were over assessed at least $600 million due to the actions of the banks and the municipal administration. The City of Detroit agreed to publicize existing housing assistance programs. Nonetheless, the fact that the residents of the overwhelming majority African American population in Detroit are facing once again a property tax foreclosure crisis indicates clearing that the legal agreement did not encompass any permanent solutions to the crisis. (www.aclumich.org)

In fact, the MNC demanded that the deadline for applying for assistance under the 2018 agreement be extended. This served to save the homes of over 1000 households. The offices of the MNC served as a base where over 100 people volunteered to knock on doors and publicize the fact that those eligible for housing relief receive the assistance they needed. Even though the corporate-imposed Mayor Mike Duggan and Wayne County took credit for the saving of these homes for working class and poor residents, there has not been any serious effort to genuinely address the housing crisis in Detroit and Wayne Country.

Next Steps in the Housing Crisis

Wayne County Treasurer Eric R. Sabree issued a statement on March 29 saying: “Our number one priority remains keeping people in their homes and to many Wayne County taxpayers are still suffering significant economic hardship due to the COVID-19 crisis. We also know that while many have applied for property tax relief from certain programs, they needed more time to compile the appropriate paperwork. So, we continue to make some allowances considering the pandemic."

This language could have easily been lifted from the MNC press release issued the previous week and years before. However, the point is to deal with the broader crisis of housing and economic underdevelopment across the U.S.

The so-called Great Recession of 2008-2010 can be viewed as the modern-day manifestation of the housing crisis, although the actual problems extend back many decades to the inherent racist character of the Federal Housing Act and the Federal Highway Act enacted from the 1930s to the 1960s. In Detroit, tens of thousands of African Americans, Latin Americans and Asian Americans had been dislocated from the areas now known as Downtown and Midtown.

Since the beginning of the 2000s, predatory lending, overinflated property values and consequent property tax assessment padding has exacerbated the institutional discrimination against nationally oppressed peoples. During the period after 2008, African Americans throughout the U.S. lost up to half or more of their household wealth which was derived from home ownership. The subsequent economic collapse in 2008-2009 impacting the banks, automotive companies, insurance firms and the demographic composition of urban areas, has never been adequately addressed by successive administrations in the White House. Therefore, the crisis remains and with the COVID-19 pandemic and its economic fallout, this question will remain for the unforeseeable future. 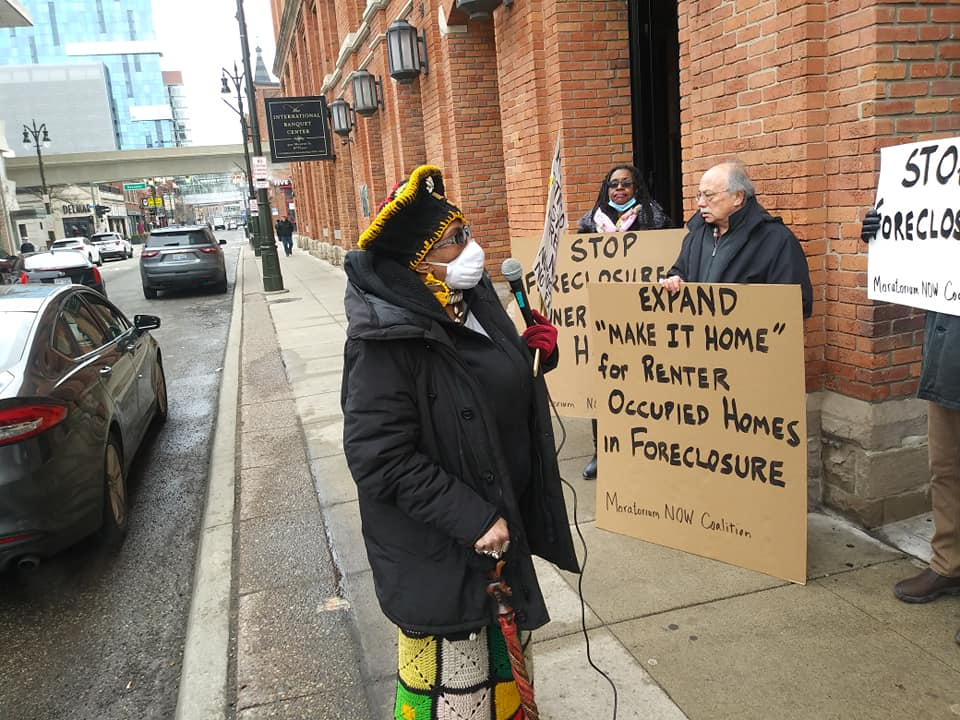 In the ruling issued by the Wayne County Third Judicial Circuit Court on March 29 notes: “The parcels of property previously removed from foreclosure by Court Order of February 22, 2022 are no longer in forfeiture for the reason that the delinquent taxes, interest, penalties and fees have been paid, and the properties have been redeemed are owned by persons who qualify for and have been granted a hardship extension in which to pay the forfeited taxes, interest, penalties and fees…. Are subject to other considerations which in the judgment of the Treasurer are best not foreclosed at this time."

These words from Wayne County Circuit Judge Timothy M. Kenny are important in the present period. However, residents of Detroit voted by an 81% margin in the 2021 municipal elections to establish a Reparations Commission to propose compensation for historical discrimination. The housing crisis and the dislocation of more than a million people over the last seven decades could serve as a beginning point in paying reparations to African Americans and other people of color communities.

A National Problem: Housing is a Human Right

The situation involving housing rights are acute in cities like Detroit where homeowners are being threatened with foreclosures and renters are subjected to higher rates and threats of evictions. The Eviction Lab at Princeton University, which tracks these issues on a national level, reveals that the crisis remains despite the statistics indicating that the problem has not accelerated to the anticipated levels of increase.

This is undoubtedly related to the anticipated worsening social crisis in municipalities if evictions are allowed to proceed at astronomical levels. Housing advocacy groups have not relented in their demands for moratoriums on evictions and promoting the notion that housing is indeed a human right. 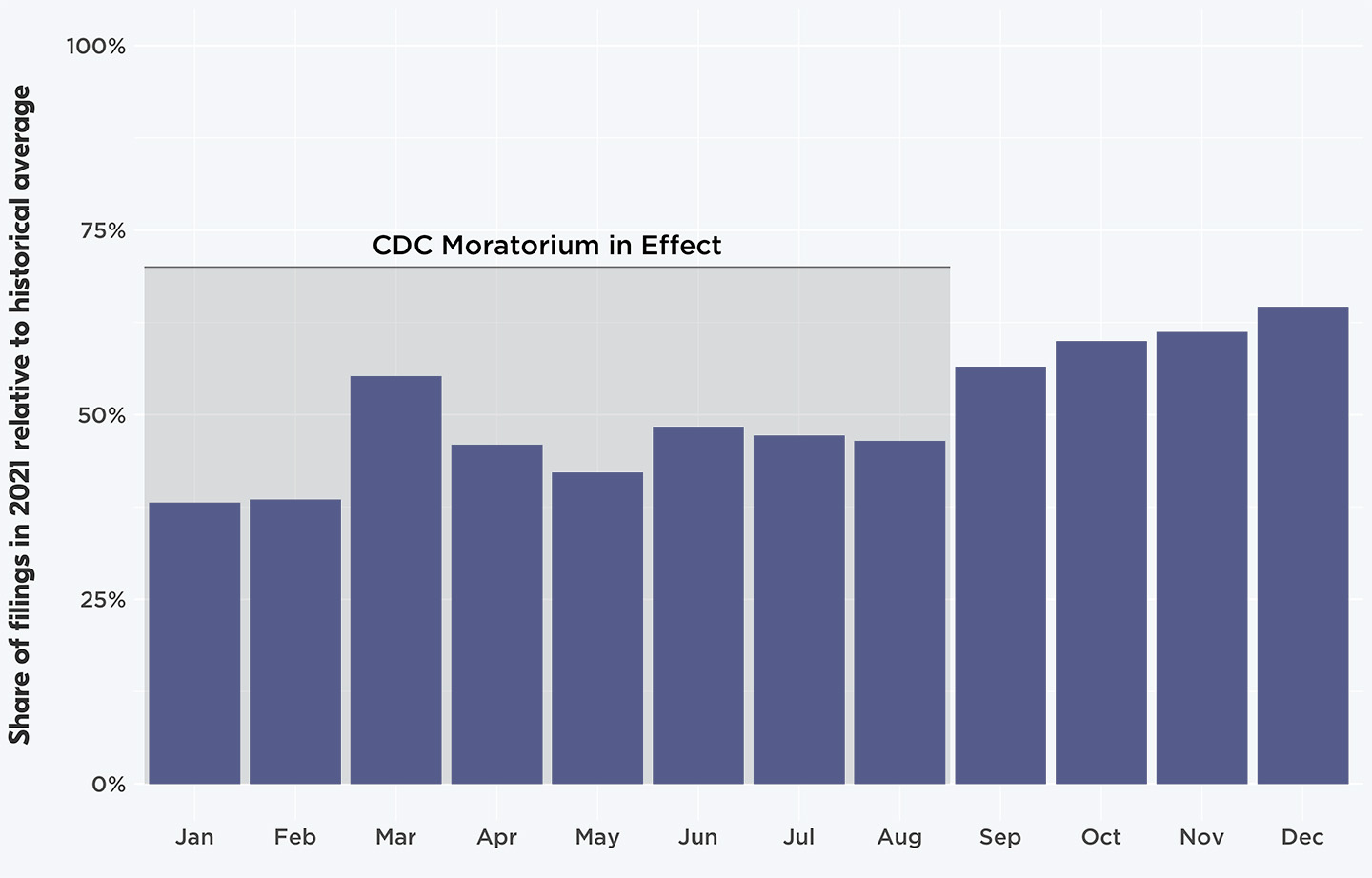 According to Eviction Lab in a recent report: “Eviction filings have increased since the end of the CDC moratorium but remain well below normal levels in nearly all jurisdictions we monitor. Why might this be? It is too soon to say definitively, but several plausible explanations bear investigation. First, emergency rental assistance (ERA) may be deterring filings. The scale and pace of ERA distribution increased markedly over the summer of 2021. The Treasury Department reported that state and local ERA programs delivered approximately $1.6 billion in June. By October, that was up to $2.86 billion, an increase of nearly 80%. The Department of the Treasury expects that $25–$30 billion of ERA funds will be spent or obligated by the end of 2021. Improvements in the distribution of these funds may have helped to encourage landlord participation in these programs and prevented eviction cases from being filed." (evictionlab.org/)

In Detroit MNC intervened beginning on September 1, 2021 with press conferences and rallies along with direct pressure on those agencies designated to distribute housing assistance funding through the COVID Emergency Rental Assistance (CERA) and the American Rescue Plan (ARP). These funds belong to the poor and working people in need.

Moreover, housing within any modern industrialized society should be considered a fundamental right. Until this is accepted by the political institutions governing the U.S., there will continue to be a crisis in housing and other essential services for people across the country.
By Abayomi Azikiwe
Editor of Pan-African News Wire.
Tags: US Housing crisis Foreclosures Detroit
Share on Facebook
Share on Twitter
Share by E-Mail
Share on WhatsApp
Share on Telegram
Top stories
Mozambique Might Require Foreign Military Assistance To Clean Up Its Hybrid War Mess
Russia-Africa Summit: The Roadmap to Africa, Shift in Geopolitical Relations
China and Russia Launch a ‘Global Resistance Economy’
Why South Africa Should Embrace Pakistan’s “Look Africa” Policy
News
powered by Surfing Waves