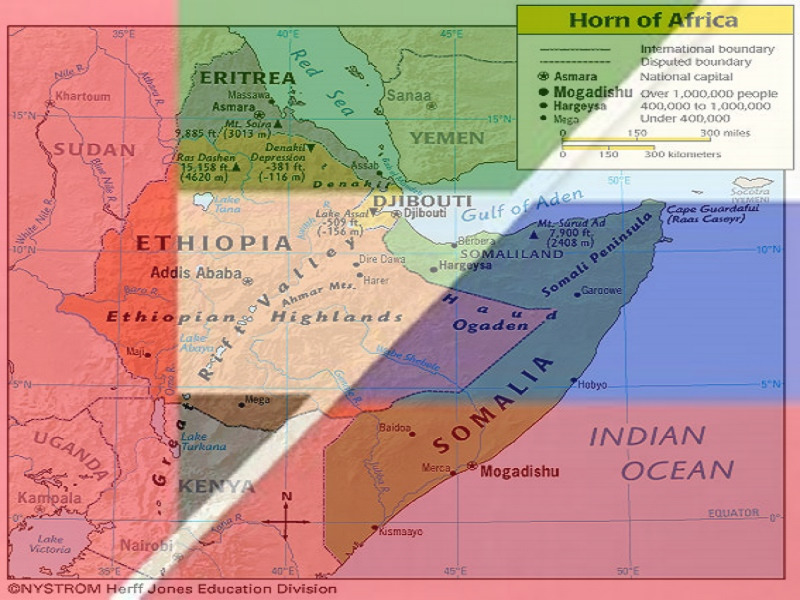 The Horn of Africa is arguably the most geostrategic part of the continent for the rest of the world at large so it's only fitting that Russia crafts a comprehensive strategy for advancing its interests there, one which would become much more viable if it seriously considered partnering with the region's de facto Emirati hegemon

The Horn Of Africa

Africa's geostrategic significance is rising as Great Powers resume their historical scramble for influence, resources, and prestige there, and nowhere is this more apparent than in the Horn of Africa. This region is arguably the most geostrategic part of the continent for the rest of the world at large given its position astride the Gulf of Aden-Red Sea (GARS) waterway connecting the Eastern Hemipshere's maritime trade routes. It's therefore only fitting that Russia crafts a comprehensive strategy for advancing its interests there which aligns with the model that it's begun to experiment with across Africa, albeit of course custom tailored for the Horn of Africa's specific context.

My recent piece asking “Is Khodorkovsky Behind Claims Of Russian Death Squads In The Central African Republic” chronologically lists my 18 prior analysis over the years on Russia's new African outreach strategy, which should be referenced by those with an interest in the topic. In particular, attention should be paid to the one about how “The Improvement Of Russian-Togolese Relations Is A Multipolar Masterstroke” since it summarizes most of what's been going on recently. To be brief, Russia is employing a combination of “Democratic Security” programs (counter-Hybrid War tactics and strategies), strategic economic deals, and political support to bolster the viability of so-called “fragile states” and strengthen their nation-building efforts.

The Horn of Africa though already has a panoply of very confident nations, most of which which live within the centrally positioned cosmopolitan state of Ethiopia that's recently been under severe strain as a result of the incipient “Balkanization” processes inadvertently catalyzed by its new leader's “glasnost” and “perestroika” attempts. They therefore don't require, nor have requested, any of Russia's “nation-building” support, though the several states comprising this region (Djibouti, Eritrea, Ethiopia, Somalia, Sudan) are still attractive destinations for Russian investment though provided that the Horn of Africa eventually stabilizes. That might not happen anytime soon though, yet Russia can't wait much longer to more actively engage the region.

Moscow's entry point appears to be the naval base that it plans to open in Sudan despite recent speculation about its future. With or without a military presence there though, Russia can still utilize this location to benefit from the prospective Sahelian-Saharan Silk Road that China might eventually advance as part of its worldwide Belt & Road Initiative (BRI) upon the end of the global economic crisis brought about by the world's uncoordinated attempts to contain COVID-19 (“World War C”). Chad's recent security challenges following the unexpected killing of its long-serving leader at the front lines of its latest war with rebel groups might further delay this project's implementation, hence the need for Russia to diversify its regional economic outreaches.

The Prospects For Ethiopian Engagement

Ethiopia is therefore an exciting prospect and close historical ties support this possible direction of Russian policy, but there's immense competition with China and the GCC so Moscow would need to find a suitable niche from which to establish its influence there. Interest exists on both sides since each aspires to improve their respective balancing acts via the other, but not much of tangible significance has occurred. Statements of intent are positive signs, but they aren't anything substantive. Both sides should therefore urgently set up working groups at the intergovernmental and entrepreneurial levels to explore this more seriously. If successful, then more trade, security, and closer political ties would be mutually beneficial and also help the larger region.

Relegating The Rest Of The Region

Speaking of which, Russian engagement with the other three countries – Djibouti, Eritrea, Somalia – remains minimal, which is unfortunate. They, too, are under a lot of external influence and have recently become scenes of intense rivalry between various powers, especially Somalia which is the scene of competition between Turkey and Qatar on one side and the UAE on the other. The latter engages mostly with the breakaway region of Somaliland, among the most stable and successful places on the continent despite its de facto independence being unrecognized. Closer Russian-Emirati coordination in recent years might in theory provide some openings to Moscow in that region, but it still remains to be seen whether it has the political will to engage Somaliland.

Regarding the UAE, Russia could also utilize its newfound ties with that country to expand its influence in Yemen, which can unofficially be regarded as a Horn of Africa country for strategic purposes. More specifically, Russia might revive its historical ties with the UAE-backed South Yemeni separatist movement, not necessarily in support of their independence agenda, but for practical reasons related to Moscow's broader interests in the Horn of Africa region. Again, this would require political will to risk provoking the ire of its internationally recognized government just like it would Somalia's in the event of engaging UAE-backed Somaliland, but this possible vector should be more closely studied by Russian strategists to assess the range of its pros and cons.

The Pros & Cons Of Engaging With The Emirates

Upon contemplating this, an intriguing possibility begins to emerge, and that's of Russia partnering more closely with the UAE in the Horn of Africa in order to proverbially “piggyback” off of its recent strategic successes there. Observers have positive, negative, and neutral views of the UAE's grand strategic vision, particularly in the Horn of Africa, which should also be considered by Russian experts before deciding whether to move ahead with this or not. Should they end up doing so, then it might be a game-changing development since the impact of a prospective Russian-Emirati Strategic Partnership in the Horn of Africa region could improve the viability of both players' comprehensive engagement there.

From Mutual To Multilateral Benefits

For example, they're each formidable military players in their own right, whether with respect to their conventional or unconventional (i.e. “mercenary”) forces, and each could entrench themselves in different economic niches in select countries like Ethiopia or their subregions such as Somaliland and South Yemen. Russia and the UAE also have different networks of partnerships across the world and particularly in Africa, so coming closer together could end up being multilaterally beneficial as well provided that they coordinate their respective visions. Nevertheless, closer Russian-Emirati ties might upset Turkey, which is expanding its influence in the Horn of Africa (specifically Somalia) and the rest of Africa more broadly, but should be manageable.

What's basically needed is a breakthrough for accelerating and expanding Russia's outreaches in the Horn of Africa region. Bilateral efforts with certain countries like Sudan and Ethiopia have failed to reap thus far apart from a possible naval base deal in Port Sudan, hence the proposal for considering a strategic partnership with the UAE, one that would imply closer engagement with the Emirates' partners in Somaliland and South Yemen. Russia needs to objectively assess its capabilities and realize that closer ties with the Horn of Africa require regional modifications to the strategy that it's presently employing in other parts of the continent. Moscow might not be able to do much on its own, but together with Abu Dhabi, they might make a major impact.