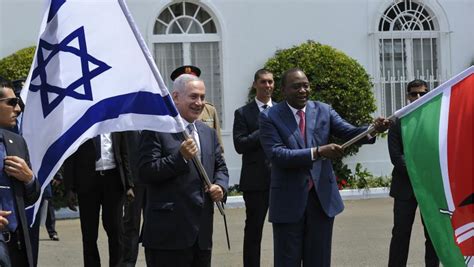 Israel has long sought to retake its position as an observer state at the African Union (AU). It had this status with the Organisation of African Unity until that continental body became the AU in 2002. AU Commission chairperson Moussa Faki Mahamat has now opened the door to Israel again – and not everyone is welcoming his decision.


Israel has long sought to retake its position as an observer state at the African Union (AU). It had this status with the Organisation of African Unity until that continental body became the AU in 2002. AU Commission chairperson Moussa Faki Mahamat has now opened the door to Israel again – and not everyone is welcoming his decision.

But how important is this issue for Africa and the AU, and does it suggest any significant changes in the continent’s relations with Israel?

If its accreditation is not overturned, Israel will join a growing list of more than 90 external partners endorsed by the AU. It will have limited access to AU documents and sit as an observer when invited to meetings. Accredited non-African states and organisations are expected to support the AU’s work in the spirit of its founding principles.

Most African governments have been silent on Faki’s July decision. This could indicate Israel’s growing influence on the continent due to changing global dynamics, particularly the normalisation of relations with several Arab countries in 2020.

But the move has upset 21 of the AU’s 55 states, some of which are members of the League of Arab States and Southern African Development Community – so much so that the matter will be reassessed when African foreign ministers meet in October.

Israel’s request for accreditation follows an improvement in its relations with some League of Arab States members, including Morocco and Sudan. But several southern and north African countries object to what they see as Faki’s unilateral decision to receive credentials from Israel’s ambassador to Ethiopia, Burundi and Chad without adequate consultation with AU member states.

Most of the opposition is based on political and procedural concerns. The legal basis for AU accreditation follows criteria for granting observer status, based on a system adopted by the Executive Council in 2005.

This system allows non-African states to participate in open sessions of the AU’s Peace and Security Council (PSC) and the opening and closing sessions of AU summits. States also get limited access to AU documents and may be invited by the commission chairperson to participate in meetings and make statements. They cannot vote, however.

The criteria allow the chairperson to consider accreditation applications, ‘bearing in mind the supreme interest of the Union and the known views and concerns of member states.’ Only if they are convinced that ‘there are no reasons why such a request should not be acceded to’ shall it be approved.

Countries that have criticised Faki’s decision claim that all African member states are unlikely to support Israel’s accreditation, given the AU’s political stance on Palestine. The AU has called for an ‘end to the Israeli occupation that started in 1967, [and] the independence of the state of Palestine on boundaries of 4 June 1967, with East Jerusalem as its capital.’

Those opposing Faki on the issue say the AU rejected two previous applications by Israel in 2013 and 2016 for this reason. As the situation in Palestine hasn’t changed, they argue, neither should Israel’s status. They claim the move would be against the AU’s founding principles and vision. However, several of these states, including South Africa and Botswana, have bilateral relations with Israel. This raises questions about their objections to the continent having relations with Israel.

In response to the criticism in early August, Faki acknowledged the AU’s continued commitment to a two-state solution for Palestine but argued that accreditation fell within his mandate. He also pointed out that more than 40 AU member states have bilateral relations with Israel and may not oppose its status change.

Israel has, in recent years, normalised relations with many African countries as its interest in the continent has grown, and regional and world politics has shifted in its favour. Improved dealings with Sudan and Morocco in 2020 followed a series of cooperation agreements between Israel and Arab states, mediated by the United States.

Israel’s supporters in the accreditation debate compare the situation to the United Kingdom’s (UK) occupation of Mauritius’s Chagos islands. African leaders have consistently called for the decolonisation of Palestine from Israeli occupation, as they have done in the case of the islands. But since the UK’s accreditation to the AU has never come under scrutiny, neither should Israel’s, they argue.

AU rules and procedures require that if even one member state objects to the accreditation of a non-African state, the Executive Council must decide. Given the current lack of consensus, the issue will go to a vote. If members agree that the matter is procedural, a simple majority vote by a quorum of two-thirds will decide Israel’s status. If not, a two-thirds majority is required.

In the lead-up to October’s meeting of foreign ministers, Israel’s opponents and supporters are lobbying for support. If states with bilateral relations with Israel openly oppose its status, others may follow suit if the issue is put to a secret ballot.

Having waited almost 20 years, AU accreditation would be a foreign policy triumph for Israel. Although African countries will continue to call for a political solution to the Israeli–Palestinian impasse, relations with the continent may strengthen despite the current uncertainties.

Beyond discussing whether Israel should be accredited, the AU Executive Council should reflect on how those that receive this status contribute to the continental body’s priorities. The PSC should be tasked with reviewing the role and impact of external partners in Africa’s efforts to achieve peace and security.